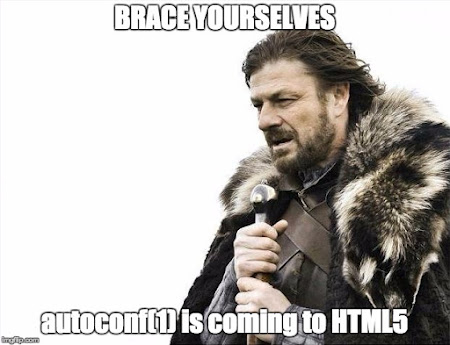 So Chrome has decided (without actually, you know, telling anybody), to deprecate hosted apps. You can still use them, make them, update them, and existing ones will still work.

They now show the url address bar, and you can't get rid of it. They likely will claim that it is a matter of anti-phishing security, but the reality is that they're trying to move you to a deployed app model...which has, in the last 3 releases, completely changed.

Among the hassles is that it completely breaks the entire intent of HTML5: portability of code across platforms.

Bad enough packaging an app for PhoneGap with its unique APIs, and Amazon's Fire platform with its, but now Chrome will require you to use their unique APIs as well (for different things). PhoneGap and Amazon supported window.localStorage. Chrome Apps does not. Same with "onbeforeunload".

The result of this spaghetti of deployment requirements is that we're getting closer to needing that dreaded aspect of Unix coding, "./configure", in order to take your spaghetti of code and translate it into something that actually runs for the platform you're targeting.

Look for those kinds of translation modules, similar to modernizr, to appear soon. Probably they'll be packaged as gulp or webpack plug-ins.

In any case, the idea that you can actually run your code in its raw form directly in your browser is passe, so "2000s". In 2010, you have to compile it, effectively, for your platform.